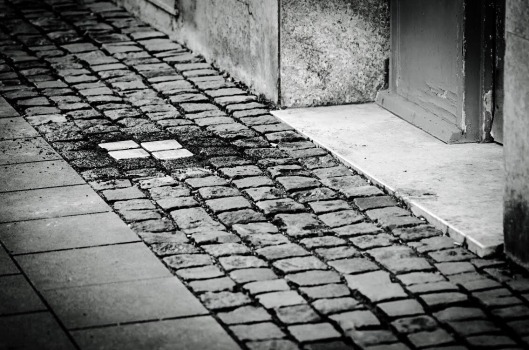 The four Stolpersteine, as we left them. Photo: Jaime Ashworth, 2018.

Gunther Demnig works fast on the chilly pavement in Germany. His practiced hands prise up four cobbles from the street: a sharp crack precedes their slow easing from the ground to expose the sandy layer beneath. The stones are on the pavement beside him, gleaming in the pale winter light.

The stones are inscribed simply: names, dates, fate, as far as this can be known. The opening statement is baldly “Hier wohnt”: here lived. This is their last known address before being deported, though the building is certainly different: the city was heavily bombed. We do not know much of what happened after three of the family were deported in 1942. A postcard from the transit ghetto in Izbica in Poland, dated July 1942, was found by chance in a Berlin fleamarket in 2016. From Izbica, their destination is uncertain but was probably Sobibor: their stones now read “murdered in occupied Poland”. The exact moment of their death is unknown: there is certainly no marker for them where they perished.

The fourth stone concludes “Flucht nach England”: fled to England. This stone is for the eldest daughter of the family, who arrived in England on a domestic servant visa in August 1939, though she had never made a bed before. It is her descendants that mill around, blocking the pavement on this grey afternoon.

The arrival of the stones made the occasion seem real. Children, grandchildren, and great-grandchildren took turns holding the stones, wrapped in their cloths, cradling them as though they were children. Photographs are taken, tears are wiped away, if not quite shed. We have gathered here for this moment from across the world, and the sight of the names has tautened the air in a way that nobody quite expected. Reluctantly giving the stones to the ground, the family stands back as Demnig pushes the stones into place and with a practiced hand embeds them, fills the gaps with mortar and with almost a flourish wipes away the excess from the inscriptions. The stones have taken their place, not only in the city of origin of those they remember, but in a network of similar memorials across Europe.

We stop, a few words are spoken, the breath of the speakers puffing in the cold air. Four of us arrived just in time for the ceremony and our suitcases are pushed neatly against the building, an odd echo of previous journeys. More words are spoken, some prayers are said, and then we load ourselves into taxis, leaving the stones. Some take a final few images. As I get in, I take a last distant shot of the four stones, together at last in the pavement, a spray of gravel marking the place where they have been worked into the landscape.

The historian Michael Burleigh wrote in 1996 that for many, “Nazism is not a matter of academic contemplation; but rather something which explains why they have no relatives or children; why they are chronically ill or have severe psychological problems; or why they live in Britain, Canada, Israel or the USA rather than Central Europe.” This year’s Holocaust Memorial Day theme, “Torn from Home”, has led me to revisit those words. Burleigh intended the words as a speculation on the state of what was then thought to be a rapidly “historicising” subject, one which might over time become a more “normal” part of history. I wonder whether in fact they have become more relevant than ever. The pictures last week of Holocaust survivors weeping over the burial of victims’ ashes from the collections of the Imperial War Museum suggests that perhaps the past is not yet done with surprises.

Witnessing Gunther Demnig lay Stolpersteine for this family while surrounded by the living proof of the eldest daughter’s survival brought home the sheer randomness of historical fate. Why was this young woman spared? What did she have to give up to do so? In his novel Exit West, Mohsin Hamid wrote that “when we migrate, we murder from our lives those we leave behind.” For so many refugees, both then and now, this is no mere figure of speech. The only other marker of this family and its fate is on its sole survivor’s grave, far away in England, amid hedgerows and birdsong.

The journey also underlined that trauma dehomes and dispossesses those who suffer it, shunting the future into strange sidings. The sight of three women, red-haired as their grandmother was, contemplating a display in the school she attended until the racial laws forced her to leave, brought home how it could have been their school. Similarly, over lunch in the small town where the family originated, I noticed the red hair of many locals, along with the surreptitious glances, trying to decide how these faces could be both familiar and strange. In my mind, I wondered how they felt. Curious? Guilty? Sad? Anxious for this reminder of how their home had a past that perhaps threatens their sense of being at home? Living amongst the traces of horror requires either constant attention or deliberate avoidance. The memorial at the ruins of the town synagogue is lonely and neglected. One of our party tried to clear some of the grime but, realising that it was not his home to tend, gave up the attempt, his hand lingering on the stone a fraction longer than it might otherwise have done.

At the same time, the trip offered many chances to form new bonds. My partner’s mother has kept in touch with the local historian who initiated contact when the postcard from her grandparents came to light, as well as the present headmistress of her mother’s school. The bright and curious current students asked informed questions about how flight from home had shaped their fellow former student. She was a migrant, so are some of them, even though second or even third generation. Perhaps she offered hope that new beginnings can be restorative, a chance to rehome oneself. Perhaps the visit also confirmed that return and connection was an option, that doors once entered through could remain open, or at least ajar.

In these turbulent days, when it seems as though Britain is hell-bent on casting itself adrift, the visit was also a chance to reflect on the meaning of movement. My partner’s grandmother must have made a journey very like ours, through Belgium and then either France or the Netherlands. But unlike us, who showed our passports once and then tucked them away again, she had to endure the border crossings of an earlier Europe, her passport stamped with a red J, explaining to anyone who demanded her papers why she was making the journey. The philosopher Walter Benjamin committed suicide in Barcelona in 1940, convinced he was to be sent back to France and the German occupation. Free movement was not acquired cheaply, and we have neglected the multiple meanings of that “freeness”. We are so accustomed to the simplicities of the modern world that we have forgotten they are privileges, not rights, and as such incur duties.

The late Elie Wiesel wrote a story of the final Passover in Sighet, the city in Romania where he grew up. His father brought a stranger to their table, “a poor Polish Jewish refugee who had seen too often and too close the victory of death over man and his prayers.” At the point in the Seder where it is traditional to open the door for the prophet Elijah, the stranger said he would perform the task, and promptly vanished. Wiesel writes that a few weeks later he saw the stranger again, on the transport bound for Auschwitz. Wiesel concludes:

Today I know what I didn’t know then: at the end of a long trip that was to last four days and three nights he got out in a small railway station, near a peaceful little town, somewhere in Silesia, where his fiery chariot was waiting to carry him up to the skies. Isn’t that enough proof that he was the Prophet Elijah?

The tearing from home leaves jagged edges in the heart. We must remember this, and that every new arrival comes from somewhere; and ask how can we know who we are turning away?