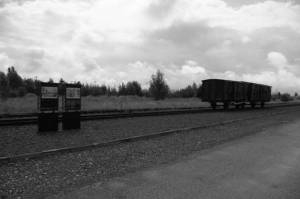 The ‘Alte Judenrampe’ between Auschwitz I and Auschwitz II-Birkenau: used between 1942 and 1944, hundreds of thousands of deportees arrived here. Photo: author, 2009.

As an academic, my research is concerned with the questions of representation associated with the Holocaust and its aftermath. To do so, I employ the term mythology in the Barthesian sense of ‘a language in which other things are spoken.’ In other words, seeing the representation of the Holocaust as more and more a prism through which other stories and concerns are addressed. Speaking of the Holocaust in Israel is to engage with the foundation of the state; in Britain, the Holocaust and World War II are important signifiers in an ongoing search for a post-imperial role between the United States and Europe; in Poland, the difficulty and controversy in talking about the Holocaust illustrate the ongoing search for an articulation of Polish wartime history that reconciles the facts with the sensibilities of those involved. In all three cases, the Holocaust is a major component of the search for a ‘usable’ past. As Robert Eaglestone observed in The Holocaust and the Postmodern (Oxford 2004) the Holocaust is ‘something wider, more significant, and, precisely because it is so all-pervasive, very much harder to pin down: [part of] a sense of “who we are” and “how the world is for us”’

But focusing exclusively on this sense of the Holocaust’s historical importance and cultural centrality – Holocaust Memorial Day is the only pan-European memorial day, for example – is to (potentially) miss an important truth. In a short and trenchant analysis of Postmodernism and Holocaust Denial (Duxford 2001), Eaglestone interrupts his characteristic eloquence to remind us that ‘writing and reading about the Holocaust is, and ought to be, distressing.’ He develops a comparison to bring home to the reader what we are talking about – mass murder – and its victims and perpetrators, reminding the reader of accounts of killings in which uniforms were described as ‘saturated with blood’.

So, compare: think about getting blood on your clothes from a nosebleed: think how much, much more blood – the blood of the victims – would ‘saturate with blood’ a thick military uniform. On one day. And the killings, of all sorts, lasted years. (p. 29)

Holocaust Memorial Day serves for me a similar purpose to Eaglestone’s comparison – which he immediately concedes is ‘not even really a comparison.’ It reminds me that fundamentally in researching and teaching about the Holocaust we are remembering the dead and asking that such things never happen again – even if the latter half of the twentieth century and opening decade of the twenty-first suggest that this lesson has been only imperfectly heard and hardly learnt at all. The knowledge that seeing this as a failure is in itself a kind of progress is a hollow sort of satisfaction, though it is better than none at all.

I use ‘mythology’ for a variety of reasons, some of which are set out above. In addition, though, it attracted me because it addressed the kind of incomprehension and sadness I feel when I engage with testimony or images that move or disturb me. To term the Holocaust a modern mythology allows me to reconcile the paradoxes inherent in trying to explain that which will not be explained, and removing any possibility that it might be explained away. Myths are not there to be explained, but instead to be heard: as an early collection of Holocaust literature put it, ‘A whirlwind cannot be taught, it must be experienced.’ And we are left with the knowledge that since we have not (for the most part, thank goodness) experienced it all we can do is try to teach it.

But there are different kinds of teaching. The following excerpt from an eyewitness account of a mass killing in Ukraine in 1942 has made me wonder – still makes me wonder – how we face the apocalypse and if there is a meaning to be found.

The father held the ten-year-old boy by the hand speaking softly to him. The boy was struggling to hold back his tears. The father pointed a finger at the sky and seemed to be explaining something to him.

More than once, while teaching groups of first-year undergraduates with this and other documents, students began to cry and apologised. It is important to remember that in the face of such things tears need no apology: we should be upset, we should cry, we should mourn. And then we should make sure that we do what we can to make the world better. God willing.

‘I think there were two reasons why I wanted an abstract painting. One is that I do not like looking at images of myself, the second reason is because I don’t like, to be truthful, most representational portraits I see nowadays. What I wanted was the presence of the idea of me, not of a record of the whole of my face that I don’t much like.’ – A. S. Byatt

The first official portrait of Catherine, Duchess of Cambridge, by the artist Paul Emsley, was unveiled last week at the National Portrait Gallery, to almost universal disdain. In case you haven’t been near a newspaper or screen in the intervening period, here it is:

The responses to the picture have been described as polarised, though I’ve seen (or heard) little that is positive about it. The Daily Mail described it as ‘rotten’ and in the Independent Michael Glover described it as ‘catastrophic’: ‘little other than a face […] which is beginning to look a touch dropsical.’ Charlotte Higgins in the Guardian said that the image transformed the sitter from ‘a pretty young woman with an infectious smile’ into ‘something unpleasant from the Twilight franchise’.

Pop culture references always set off alarm bells for me, raising the suspicion that the writer wants me to respond before (or instead of) thinking. And the snide tone of comments on Facebook and Twitter made me still more uneasy. In particular, the update that ‘[X] thought it showed great foresight to paint what the Duchess will look like after she’s given birth’ prompted me to give some serious thought about what was going on.

The term portrait is deceptive in its neatness. Like all ideas and practices with such an extended heritage, it has mutated and shifted, and carries with it the complexities of its previous incarnations. The criteria that one might use to either evaluate or even define a portrait – likeness, identity, representation – are ambiguous, muddying rather than clarifying the questions, let alone the answers. The notion of a ‘successful’ portrait makes things more difficult still, relying as it does on competing ideas about what or who a sitter ‘is’ both to themselves and others, or even what it means to represent someone. Even a short tour through the National Portrait Gallery presents these issues starkly.

For example, just a few metres down the corridor from the Emsley portrait (as I’m going to refer to it from now on) is Patrick Heron’s 1997 portrait of the novelist A. S. Byatt.

As a likeness, this is clearly not intended to assist Byatt in, say, being identified by officialdom (though how many of us think we look like our passport photos?) As Byatt’s comment at the head of this piece makes clear, however, it is something else: a statement by artist, sitter and institution about what is important about Byatt. It is a site of debate about what Paul Moorhouse has termed the ‘veracity of the relationship between the subject and the depiction’ and the result of a process in which, as Peter Burke puts it, ‘artist and sitter generally colluded.’ Roland Barthes provided a characteristically loquacious summary of these issues in Camera Lucida, writing that in the portrait ‘I am at the same time: the one I think I am, the one I want others to think I am, the one the [artist] thinks I am, and the one he makes use of to exhibit his art.’ The tensions in this process are laid bare in Imagined Lives, a collection of stories by contemporary writers to imagine the antecedents of ‘unknown’ portraits in the NPG’s collection.  As Tarnya Cooper writes in her concluding essay, they are ‘lost souls whose quest for immortality has been only partially successful.’

Taking this idea of the portrait as a locus of competing projections of identity as a starting point seems to me to raise some more interesting questions than whether we ‘like’ the image or not. (Leaving aside the question of whether a binary like/dislike is a sufficiently refined tool with which to approach a piece of art.)

Firstly: why do we seem to assume that the subject is not in control of the depiction? In their essays on the depiction of the Queen for a Jubilee Exhibition in 2012, David Cannadine and Paul Moorhouse both draw attention to the problems of a situation where ‘the sheer quantity of visual information about the British monarchy is greater than ever, more easily accessible and harder to regulate.’ While this is true – and the Leveson enquiry last year asked difficult questions about both accessibility and regulation – this portrait is a different kind of statement. The result of a commission and co-operation between an artist with an extensive portfolio, a sitter with a degree in art history, and an institution with centuries-long experience of moulding public response, it seems unlikely that the picture is one that none of them predicted. Presumably, in fact, this portrait is at least intended to do something. It is certainly much more interesting to assume this is the case, because we can then ask what are the expectations /narratives that it seems to be contradicting or frustrating? The answer (I suggest) is in the headlines.

Michael Glover’s piece in the Independent is entitled ‘Paul Emsley’s Duchess of Cambridge portrait is catastrophic’. The sub-heading is: ‘The first official portrait makes Kate Middleton’s cheeks look hamsterish, and her face saggy and a touch dropsical, writes Michael Glover’. There is a clear tension here between ‘Catherine, Duchess of Cambridge’ (as the NPG lists the portrait) and ‘Kate’. In the Guardian, we find the same tension, reversed: Charlotte Higgins’s piece is ‘Kate’s portrait – straight from the Twilight franchise’ and the sub-heading: ‘The Duchess of Cambridge’s official portrait, by Paul Emsley, shows her washed-out, heavy-lidded and seemingly fanged’. So why has this image got everyone’s titles in a twist?

An important clue is on her right ear in the portrait: an earring, identified by the Daily Mail as belonging to Diana, Princess of Wales and featured in her appearance on the cover of Vogue in 1994: 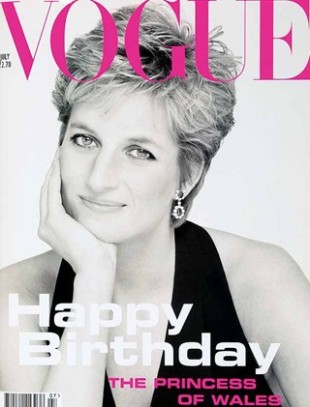 Diana’s jewellery has been a big part of the image of ‘Kate’ in the last couple of years. In addition to the news coverage of the use by the couple of Diana’s engagement ring, the engagement portraits of the Royal couple (by Mario Testino) featured the ring (which incidentally bears more than a passing similarity to the earrings) in prominent part of the composition. 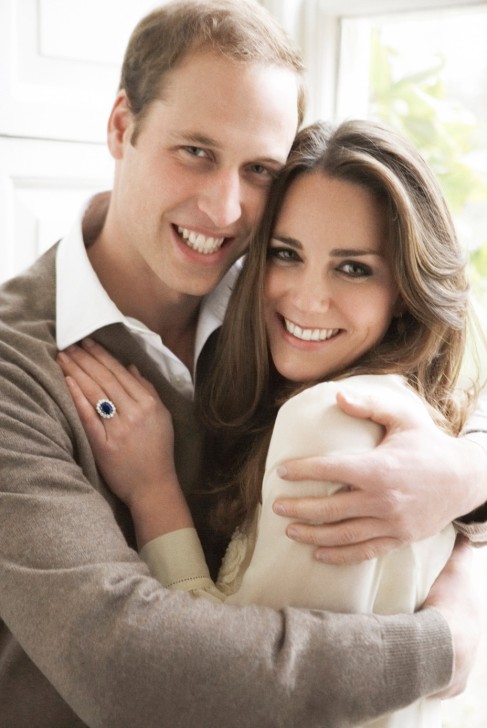 The beaming and girlish ‘Kate’ – enfolded in her fiance’s arms – is meant to recall her late mother-in-law: the angle and pose emphasise the similarities in facial structure, and the smiles are almost identical: compare with David Bailey’s 1988 image of Diana.

Like Diana, ‘Kate’ looks straight into the camera: what kind of communication this is may be in doubt, but it is a communication.

In the new portrait, however, ‘Kate’ is no longer: instead ‘the Duchess’ gazes slightly out of frame, amused at a joke which we are not invited to share. Perhaps appropriately, this is a bid to create her own image rather than submit to the images of others, to impose the presence of her own idea of her. Whether that attempt is successful, of course, is another matter entirely. But neither she nor we can know that.