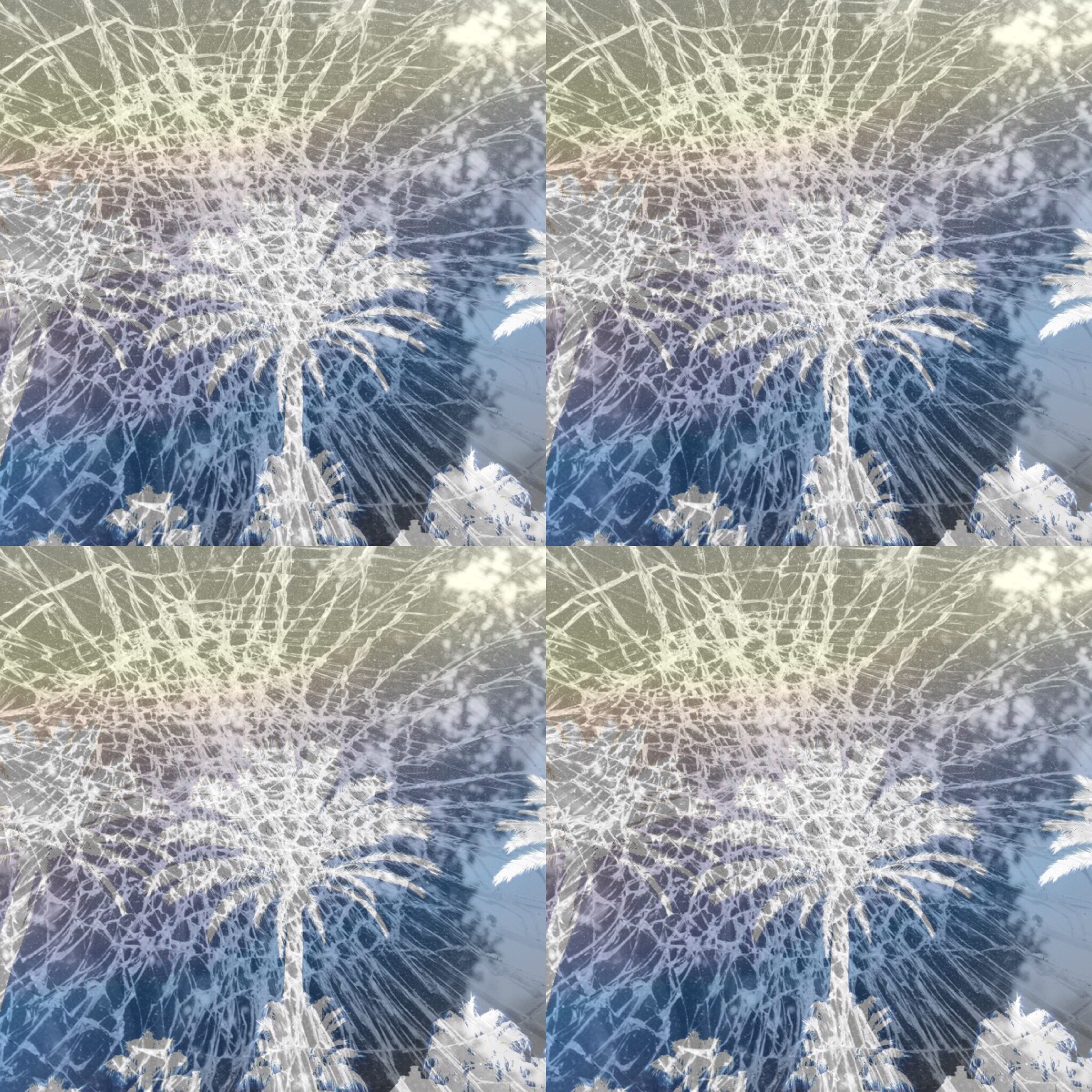 This is getting serious. I wrote a couple of days ago about the resemblance between the events of the past week and the summer of 1914: mostly suggesting that the isolation and unreality both the Trump presidency and the North Korean regime exist in contribute to attempts to ‘win’ Armageddon. As though a mushroom cloud could ever be something other than a Pyrrhic victory.

The neo-Nazi demonstration in Charlottesville (see picture below for evidence to support the name) and the subsequent limp dumb-show of concern from the White House lead me to suspect that the resemblance between the present United States and late Imperial Germany may go deeper still.

In 1961, Fritz Fischer, a professor of History at the University of Hamburg, published Griff nach der Weltmacht (published in English as Germany’s Aims in the First World War). In it he argued that Germany had exploited the crisis of 1914 in a deliberate attempt to become a world power. In a later book, War of Illusions (1969) he argued for Primat der Innenpolitik, the primacy of domestic policy: the idea that the German government, threatened by rising demands for democracy and especially by the success of the Socialist Party in prewar elections, used the foreign policy crisis to distract from domestic problems.

The idea that politicians use foreign policy to distract from or even solve domestic issues is by now a commonplace. From Nixon to Obama, US presidents have faced the charge that they have bombed their way back into the polls. Some have even been successful.

(Sidebar: any UK readers feeling smug at this point should remember the post-Falklands “khaki election” of 1983 and the “I support our troops” boorishness of the early Afghan and Iraqi campaigns.)

Fischer’s ideas have been subjected to criticism, most substantively on three grounds. Firstly that, while probably decisive, German actions in 1914 were reacting to a crisis that existed without them; secondly, that other powers (notably Britain) may have seen an opportunity to retard growing German influence; and, finally, that the document relied upon by Fischer was not produced until September 1914, after war had broken out.

Historical comparison requires a light touch. Situations are never replicated and lessons are learned. JFK, for example, was influenced during the Cuban Missile Crisis by Barbara Tuchman’s August 1914 which emphasised the need for clear thinking and communication during crises.

But the parallels are striking. An overprivileged and spoilt leader with a penchant for intemperate comments and no clear grasp of diplomatic realities (Trump’s tweets, the Kaiser’s Kruger Telegram). Domestic unpopularity and the need for a unifying external enemy. The sense that other powers are threatening to eclipse a power clinging on to hegemony by its fingertips: America first, Trump says, but first before whom?

None of these are necessarily novelties. Trump’s awfulness is blurring the memory of George W. Bush and his use of the military to play out a family feud in the desert of Iraq. The underlying problem of perceived American decline has been an American concern since before the decline really started, somewhere in the late 1960s. But now, in contrast to the late Cold War (when US dominance was ensured by the structural weakness of the USSR) there are several plausible rivals to the US: most notably China, which has intervened this week to remind both sides that they are bickering in its backyard and will pick sides based on who strikes first. The brief glow of pride in moving from a bipolar world (US/USSR) to a period of hegemony by default has faded as China and India rise, the EU has solidified into more than a trading bloc (if not a state, federal or otherwise), and even Russia has reacquired a measure of its former confidence.

So how does this link to the neo-Nazis in Charlottesville? Am I suggesting that they are part of a conspiracy to force the President to push harder? No, while shocked by his refusal to condemn them I don’t believe this was orchestrated in the crude sense: this is the third time such protests have been held. But the tenor of the Trump presidency since his inauguration has given them insidious permission to act out their fantasies.

In other words, they are in the grip of the same crisis of illusions as their president (chanting “Heil Trump” in some cases.) Their toxic attachment to the symbols of racial oppression is what got Trump elected and it’s the base to which he panders as his core support becomes his only support. His slogan of “Make America Great Again” allows his crowds to insert their own vision of American greatness to re-aspire to. Whether “greatness” signifies the genteel, syrupy savagery of the antebellum South (Gone with the Wind), the complacent vanilla of pre-desegregation suburbia (Mad Men), vacuous 1980s opulence (Dallas and Dynasty) or a post-apocalyptic redneck Reich (think Deliverance meets Mad Max) is up to the individual.

But all of these visions are pop-culture simulacra of things that either never existed or needed to end. And those shouting the loudest don’t know what to replace them with. The uncomfortable truth that their privilege was not just unearned but extorted from others just drives them further into fantasy. For all his bluster, Trump cannot deliver solutions that will address the problems of 2017 with the solutions of the 1930s. So he is left with what Fischer termed flucht nach vorn: flight forwards, from the economy, from healthcare, from (thankfully) failed immigration policy to…who knows.

Does Trump know the answer? It may be comforting to think he is simply #bereftofreason but the footage of him refusing to answer questions about Charlottesville told a different story. A man who tweets at the TV in the small hours of the morning refused to be drawn on the major story of the day. The much-tweeted commentary by the far-right drew attention to the lack of censure for them, characterising it as tacit approval. The blanks left in journalists’ questions are eloquent in themselves, as is Trump’s nonchalant body language ignoring them. 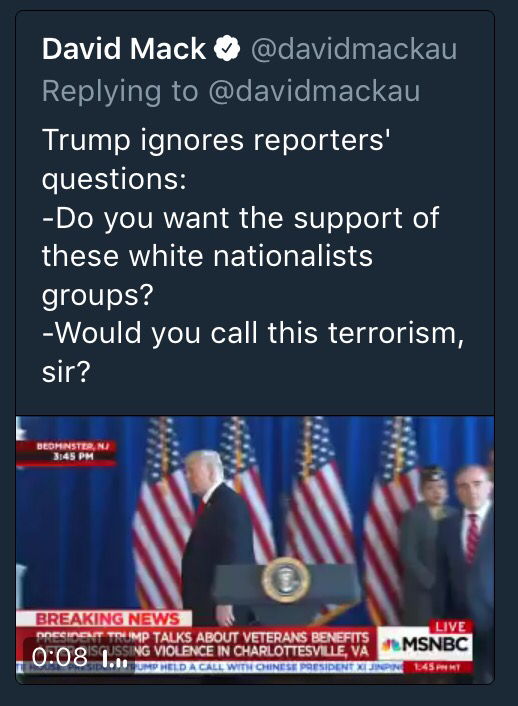 Remember this is a man who is so free with his opinions he started a nuclear crisis off-the-cuff. If he doesn’t speak, it means something. We must read into his silences that he is at least unconcerned or possibly actively pleased that his base is more concerned to preserve the legacy of the Confederacy than ask him to deliver, as long are there is an “Other” to disturb their nostalgia.

The exact nature of links between the Trump presidency and what its apologists term the “alt-Right” should be a matter for a Congressional grand jury and will be a concern for future historians. They may also try and establish links between this week’s events that go beyond them happening at the same time. They may even find them. What they will almost certainly ask is why those in all three branches of government did not do more to stop this. This is a crisis and requires the shedding of illusions by those who can stop this legally. Trump must be stopped.

2 thoughts on “Crisis of Illusions”